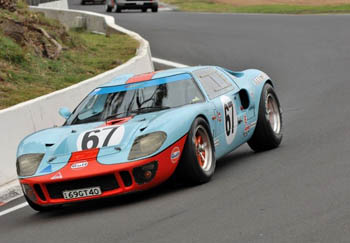 ith the end of the 2014 Touring Car Masters Series now upon us, and William having achieved third in class for the second year in a row (including several podium finishes throughout the year), I hear you ask: “where to from here?” The plan for 2015 is for me to return to local racing in the TCM Series, after sitting on the sidelines for the last two years due to ‘other’ commitments.

In brief, I started my racing late in 2006, with the first taste of it coming at the Cobra Nationals (Cobra Car Club) at Wakefield Park. Having enjoyed watching the heroes of days past over many years, I finally got to experience the on-track thrill, spins and spills of it all for myself – and I was hooked! 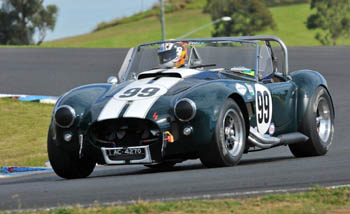 Next step was to buy and campaign a HQ Holden in the NSW State titles, in 2007 and ’08. The one-make HQ Series was a great way for me to learn the art of motor racing and gain plenty of experience on the track – and the HQ racers were certainly a great bunch of blokes, always friendly and helpful.

But it was still not quite what I was looking for: the racing was good, but there was a certain “thunder” missing… After a few more runs in my Cobra and GT40 with HSRCA and FoSC, the opportunity of having a crack at the Mountain (Bathurst) loomed. This was Easter, 2009. 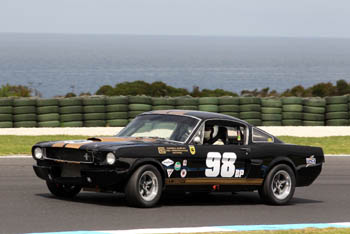 That's where I shared a garage with Dave Falvey (William’s step father) and our friendship evolved from there. We participated in quite a few events together at Oran Park, Wakefield and Eastern Creek, and even back to Bathurst for the FoSC in Easter, 2010. From the Cobra and GT40 I transitioned into the Shelby GT350 and had many great races with Dave, and many other drivers too in HSRCA and FoSC events.

However, I always had a yearning to drive the tracks I had read about – some of the great circuits not only of Australia but other parts of the world. An opportunity presented itself to run at Phillip Island with VHRR in March of 2012. Will had driven the Shelby a few times, so we double entered and had a crack at it together. 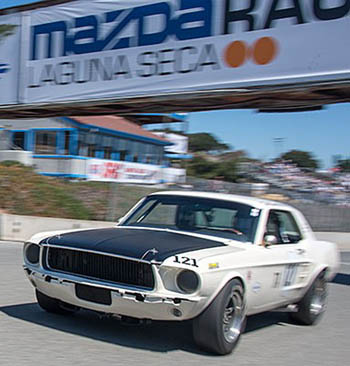 One thing led to another, and the McAlister TCM Mustang became available. I thought it fitted within my garage profile so we embarked on that campaign, and as I had work and overseas commitments I thought that William could gain from the experience – so he was recruited to drive the car.

In the meantime I had the chance to tick off part of my international track bucket list. I was able to run at Watkins Glen (twice), Sebring, Road America, Laguna Seca and Lime Rock. In all it was an incredible adventure to experience all these great American circuits, but now it’s time for me to focus back home and enjoy our own iconic tracks in the premium spectator category Touring Car Masters – amongst our own legends of motor sport.

Hope to see you trackside supporting TCM and car #98. 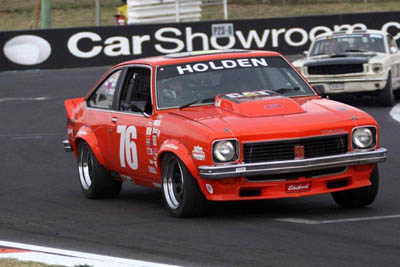 Will is new to TCM but has been following the class since its early days and is now in a position to join the ranks of John Bowe, Jim Richards, Keith Kassulke, Andrew Miedecke and all the other TCM drivers. This powerhouse class is generating a great following of motorsport fans thanks to the close racing the drivers put on, along with the well-presented muscle cars from the 60’s and 70’s they pilot at Supercar speeds. These cars are very much crowd favourites and the Aussie motorsport enthusiasts can really relate to these awesome big horsepower classic pure muscle cars. Big sound, big tyres and big names make up the grids supporting the V8 Supercars at tracks all across Australia.

Will has come out of the shadows in a dream come true opportunity to take up the driver’s seat in the Don Dimitriadis owned Mustang. Don’s involvement in motorsport goes back many years and his passion for muscle car racing and collectible cars is well regarded.

It is through the friendship with Don over the last few years that has seen Will at the wheel of a number of Don’s collectible classics, from Corvettes to Mustangs, to AC Cobras, GT 40 and a lot in-between, as late as last year saw Don and Will pair up at Phillip island Historic’s in Don’s Genuine Shelby GT 350 Hertz Renta Racer.

Don decided in mid-2012 to enter a car in the 2013 series. The ex-McAllister mustang coupe was purchased and good friend John Bowe did some evaluation testing on the car and in turn it was sent to Savy Motorsport who coincidentally prepares a number of the front running TCM cars. From there it’s getting a major re-fit ready for the 2013 season. 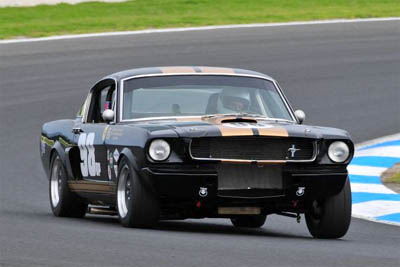 Will has agreed with Don to steer the Mustang coupe and it’s a great show of support from Don to put Will in this competitive National Series. Over the years Don has watched Will develop as a very calm and focussed driver, his natural ability to drive and a unique feel for the car gives us all good positive signs for a challenging year ahead.

Will’s background into TCM is a bit fairy-tale like, almost Hollywood movie script stuff. Will has not had the usual entry apprenticeship through go karts or formula fords but instead with his Dad he has had an early baptism into motorsport in his Dad’s 400hp Torana hatch back. Numerous events over the last 10 years at Oran park, Eastern Creek, Winton, Wakefield park, Phillip island and over 100 laps at Bathurst, plus the usual hill climbs, sprints, 4 time Speed on Tweed entrant , Winton 300 co-drive with John Bowe and Wakefield 300 endurance races. So a bit different from the usual background where Will has jumped straight into big Horsepower muscle cars from the start.


Where did Will come from?

iwi born and raised up to 10 years ago, I am his step dad and have raised him with his mum and 2 sisters. He had the typical upbringing but was introduced to cars and hot rods from the start, whether it be his early days building paddock bashing go carts to being part of series winning Trans-am race car team (Will was only 12 at the time but was always helping around the pits and getting used to the sweet sound of 600 hp on tap) learning to drive in my HT GTS 350 Monaro or our 400 HP AC Cobra (he had good stuff to pick from!) and later building his own RX7 and being part of Targa classic events. He has always been around motorsport in one form or another. At 27 years of age he already has good experience in motorsport but will now try his hand at a very competitive series along with some of Australia’s most famous drivers.

Over the last 3 years Don and I formed the Thunder Road Race team. We all have the same passion for muscle cars and certainly like to exercise our own cars on the track as often as possible. Don has contracted Will to drive for him. It’s a big gamble to put a rookie into such an expensive competitive class but we all see something in Will and we are sure he’ll do well in this class. Even at his age, he too has a passion for these cars and the camaraderie of the team.

Will is a builder by trade in Sydney, works hard and all his spare time is about developing his skill with the car and understanding the car. Getting comfortable with this 500+hp beast won’t be easy, especially with some tough traffic out there in Bowe, Miedecke and Richards and the rest.

t’s currently at the Savy Motorsport “clinic” getting the treatment. Rest assured this no expense spared rebuild will see it as one of the best prepared mustangs in the world. Big call I know, but you need to see it, fresh 500+hp dry sumped 302, new G force box, Trutrac rear end, big block Brembos, and immaculate body/interior preparation and finished in Hertz black and gold stripes. Low fat and mean! 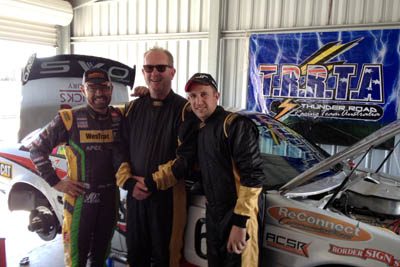 This mustang coupe will compliment Dons fleet of 2 genuine Shelby GT 350’s, a 65 coupe in the U.S.A which he Races at historic U.S. events such as Watkins Glen of late, a genuine Boss 429, a genuine Shelby 67 GT500, plus a Boss 302 Trans am on its way to Australia now, you could say this man loves his Mustangs and other collectible muscle cars.

Will has another real advantage to assist him with his debut year: the TRRTA Team is fortunate to have Australian motorsport legend John Bowe as a family friend and John has been very helpful in mentoring Will. Others to lend great support are the Savy Motorsport team of Dick and Jill along with other drivers that Dick is preparing the cars for such as Keith Kassulke and Les Walmsley. Greg Jones from Albury who has also played a significant mentoring role is having Will as part of his driver teams for the enduros at Winton and Wakefield with JB and Les as co-drivers. How lucky is Will to have mentors like these guys? Plus a team owner that believes in him…


Where to from here?

ell this fairy tale is rapidly becoming a reality with the car having its final preparation and ready for testing, we’ve got to get that Savy Horsepower to the ground, with a lot of test days planned between now and the TCM debut at the Top Gear Festival in early March.

This TRRTA Team is all about having fun and having a go, with the support of key stakeholder in Don the team owner, Savy Motorsport crew, plus the support from the TRRTA members and friends who’s vision is to have some fun in cars we all love and to watch a “young gun” have ago and enjoy himself.


How good is that for a “real life” Hollywood script?


See you at the track and come up and say G’day to Will and his crew.