We started off the year with a trip to the land of the "Long White Cloud". Nine TCM cars took on the Sports Sedans of Central Muscle Cars and fared pretty well, but came away with what became the norm for our year: "DNF".

A hasty trip home to start the 2015 campaign at Clipsal, and again panel damage. Repaired we headed to Tassie and raced hard all weekend showing our 5ltr could match it with the bigger 6ltr cars. Then off to Winton for Round 3 and finished on the podium. Next off to Darwin which looked promising but saw a DNS for the weekend and another DNF at Queensland. In the wars again at Muscle Car Masters, then off to Bathurst where early signs showed we were on the pace but again the DNF got us.

So we closed the bag on 2015 and decided to concentrate on our 2016 campaign, which has seen us regroup.

To all our Facebook friends we hope you will join us on the journey again this year as we get ready for another season in the premium category of Australian Motor Sports.

If we are at your local track don't forget to come and say high and have your photo taken in Jenny. We'd like to see you! 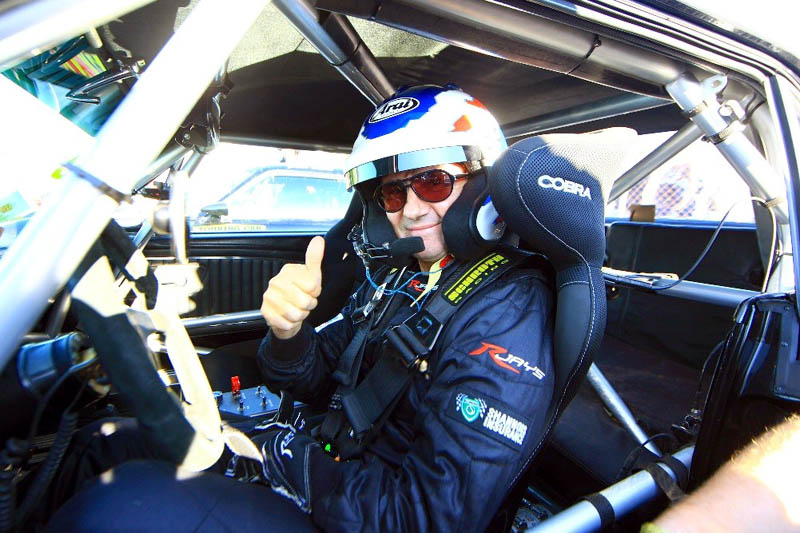 A recent issue of the Australian Muscle Car magazine published this article regarding Glenn Seton joining us. Click here to read »


PARTNERS PARADE
Being a partner to William Vining-Falvey in his (LHD) 1964 TCM Mustang gets the thumbs up from our Patron, Brian Lawler.

We're excited to announce that TRRTA have secured Glenn Seton to race Mustang "Jenny" in the upcoming TCM season.

in brief Glenn has won the Australian Touring Car Championship in 1993 and 1997 while driving for his own team, he's started from pole position at Bathurst in 1994 and 1996, and finished second three times. He came close to winning the race in 1995, holding a significant lead in the closing stages, but his engine failed 9 laps from the finish.

Glenn retired from full-time racing after the 2005 V8 Supercar season, and is only one of five drivers to have competed in over 200 rounds in the series. The other drivers are Dick Johnson (202), John Bowe (225), Mark Skaife (214) and Peter Brock (212). In the past he has run his own team for a number of years. He has usually raced Fords and Nissan's in the Australian Touring Car Championship since making his debut in his dad's Ford Capri in the 1984 ATCC. Glenn continued to race in the V8 Supercar series part-time up to 2010 as a co-driver in the enduros. Glenn has also made the occasional appearance in the TCM series, having won Race 3 at Bathurst in 2011.

We had a successful test session with TRRTA at Winton in December, allowing us to prepare for the Trans-Tasman Challenge in New Zealand at Highlands Motorsport Park at the end of January (Highlands Festival Of Speed) and from there discussions have continued allowing "an offer that couldn't be refused" to be finalised. 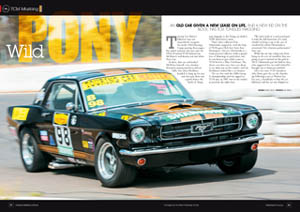 AN OLD CAR GIVEN A NEW LEASE ON LIFE, AND A NEW KID ON THE BLOCK, HAS TCM TONGUES WAGGING

Touring Car Masters followers may not immediately recognise the lovely 1964 Mustang Coupe gracing these pages, but squint and you may just spot the DNA of retired TCM stalwart Ian McAlister’s well-known red and white Pony Car.

In short, that car, and indeed McAlister himself, were absolute favourites among rusted-on old-car buffs. But when McAlister decided to hang up his race suit last year, there was a good chance the lovely ol ’Stang may languish in the Young car dealer’s NSW shed forever more.

That’s when collector Don Dimitriadis stepped in, with the help of TCM guru Dick Savy from Savy Motorsport. You see, Dimitriadis is a Ford-oriented collector (with a special love of Mustangs in particular), and he was keen to give a kid a start at TCM level in a Blue Oval beast. The choice was then easy. Savy cast about to see what was on the market, and Ian McAlister’s looked like a no-brainer...  Open full PDF article »